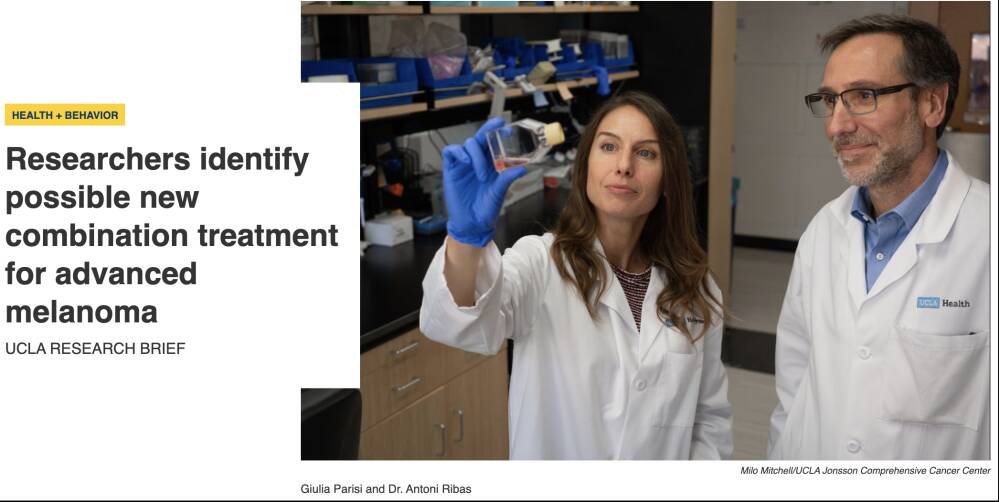 A study by researchers at the UCLA Jonsson Comprehensive Cancer Center suggests that using an immunotherapy drug called NKTR-214, also known as bempegaldesleukin, in combination with an infusion of anti-tumor immune cells, or T cells, may produce a stronger immune response that could help fight advanced melanoma.

When tested in mice with melanoma tumors that were unlikely to stimulate an immune response, the approach increased the number of anti-tumor immune cells, and those immune cells lived longer and functioned better than the standard therapy, empowering the cells to destroy the tumor.

Adoptive cell therapy is a type of immunotherapy that has had promising results for treating people with advanced cancers. The approach involves extracting and harvesting immune cells from a patient and engineering them in the laboratory to attack specific antigens on the surface of tumors. One challenge is that it requires giving patients interleukin 2, a protein signaling molecule in the immune system, to promote the development and expansion of the infused immune cells. But interleukin 2 can also activate cells to suppress the immune system, and because it is highly toxic, it can have serious adverse side effects.

Researchers have been seeking ways to produce large number of immune cells without exposing patients to those negative side effects — including by combining adoptive cell therapy with other treatments.

Researchers used mice to test NKTR-214 in combination with adoptive cell therapy. Using bioluminescence imaging, the researchers tracked the movement of T cells in the mice that received the combination therapy. The team observed an expansion of T cells in the spleen, the organ that helps accelerate the activation and expansion of T cells throughout the body. The T cells then migrated to the tumor, where they continued to have a long-lasting effect. The in vivo expansion and T cell accumulation in tumors was greatly improved when using NKTR-214 compared to using interleukin-2.

While immunotherapy has changed the face of cancer treatment for people with advanced cancers, it still only works in a small subset of patients. The results of the UCLA study suggest that using NKTR-214 in combination with adoptive cell therapy could be effective for more people with advanced solid tumors.

The study is published online in Nature Communications.

The study was funded in part by the National Institutes of Health and the Parker Institute for Cancer Immunotherapy.